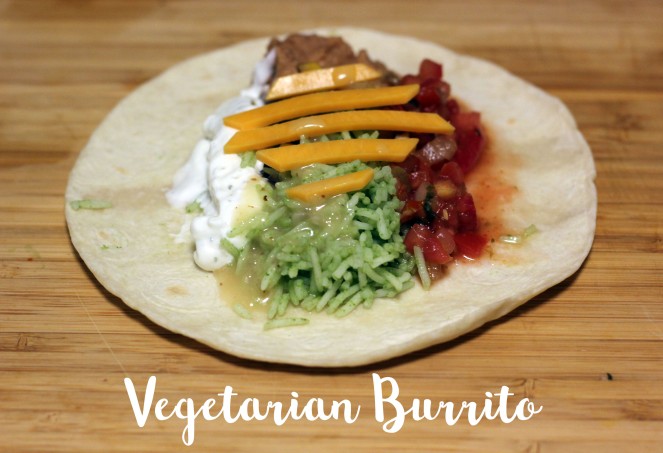 One burrito is kinda sad and alone. Two burritos make a happy bae-ritto. And, this vegetarian burrito recipe is so good that you’re gonna wanna have two. Like most of my recipes, I like this because it takes little time to make. This might be because a lot of the ingredients are pre-made or store bought, but they’re all those that you would usually have in your kitchen anyway.

I used small tortillas for this one so I made 6 but you could use the same recipe for 3 big ones and have one and a half each. Let’s be real. You’re not REALLY full after one full burrito and you don’t want to eat another full one. One and a half burrito is the perfect balance between gluttony and restraint.

1 can of refried beans

Salt and Pepper to taste

Shredded Cheese (I had Kraft singles so I sliced them up into small, long, pieces but shredded cheese is better)

It’s hard being a vegetarian when you like food but Shreya Jhunjhunwala is a second-year Creative Communications student from Winnipeg doing just that. Whatever she can’t find in Winnipeg restaurants, she tries to make in her kitchen. And that is an adventure in itself. View all posts by shreyajjw